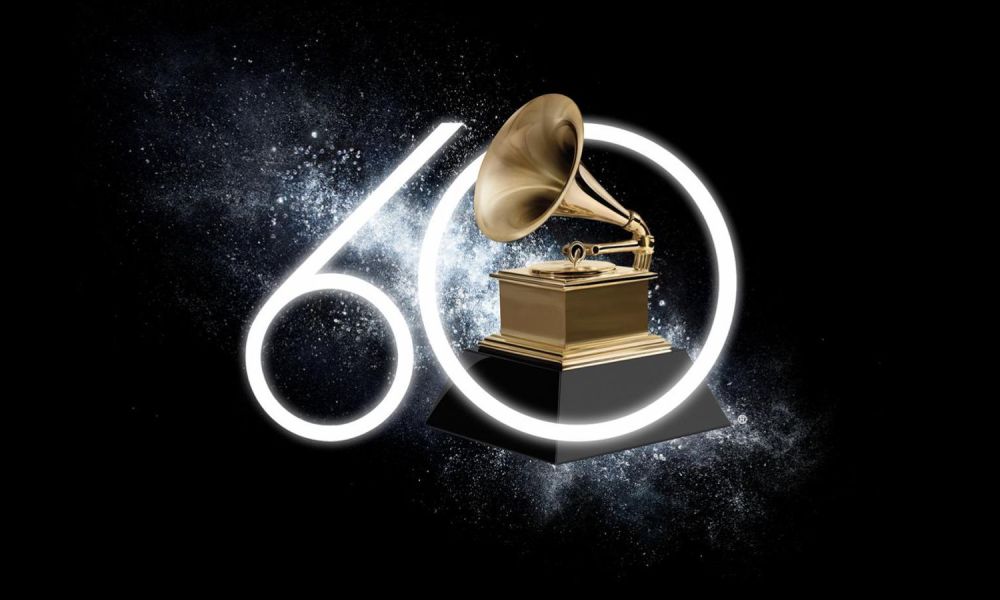 After just landing back in the UK from sunny California, I’m regretting that I didn’t stay in the US another night to watch it live. I mean, where are my priorities at?

Unless jet lag wakes me at 3am so I can at least see the best album announced, it looks like I’ll be waking up to the news in London on Monday morning and reading it in bed through a half-sleepy squint.

Will it be good-for-a-Monday morning news, or it will it just add to the major life questions that block this one’s subconscious at the start of the working week?

It really is hard to say.

The Grammys are always a bit weird when dishing out the trophies but in recent years the best album category has been increasingly contentious: Beck beating Beyoncé, Adele beating Beyoncé, Mumford and Sons over Frank Ocean, Herbie Hancock over Amy Winehouse.

Then, sometimes they do get it absolutely right. Exhibit A+ x 4:

Tonight’s field for best album is one of the (mostly) best in recent years – and not just because there’s not an Ed Sheeran or Sam Smith in sight.

While I am gutted that SZA’s incredibly accomplished and creative debut CTRL didn’t make the cut, the inclusion of Kendrick, Lorde and Jay Z has me feeling sufficiently represented. I can even dig Childish Gambino’s nod for his subtle theatrics on “Awaken, My Love!”

Plus, I am gunning for my GRL SZA as Best New Artist. This should be a shoe-in if there ever was one. Important to note the should (more on that below).

Lorde deserves the nomination but I’m not sure the album got the widespread attention it deserves and needed for the hardly-adventurous Grammy voters.

No Hip Hop artist has won since Outkast, who nabbed it for one of the most unconventional (double) albums in that space. It straddled most people’s tastes across the two individual records. So was an exception, even if ultimately deserving.

It would be oh-so-sweet to see Jay Z get his long over-dues for his bold and beautiful return to form on 4:44. By my calculation, he has never been nominated in this category before, which makes me want to take a mouthful of soup so I can spit it out in dismay.

On the other hand that’s not holding the soup spoon, it would also be bitter that he wins for an album inspired by his cheating on Beyoncé when she was robbed (again) of that same acknowledgement last year for the incomparable work of art that is Lemonade, aka her initial response to that same cheating.

All that aside, it has to be King Kenny’s year. His hot streak of classic masterful albums is undisputed – this is his third best album nom in a row – and DAMN. was his most accomplished and accessible complete piece of work to date.

But Lemonade and Beyoncé met those same criteria last year and still didn’t walk away with the gold.

We might be forced to forget all of that, for this is the Grammys. That means we could just as likely hear them give it to Bruno Mars. No shade on Bruno, I like him. But in this field, and with this album, he pales in comparison and it would be another embarrassing snub by the Grammy voters. Being the safe crowd pleasing choice, we may find ourselves disappointed but not surprised.

I just went onto the Grammy site and they have a reader poll that only confirms my suspicions.

So I decided to message the Grammys and tell them to give it to Kendrick. That’s me in the blue. 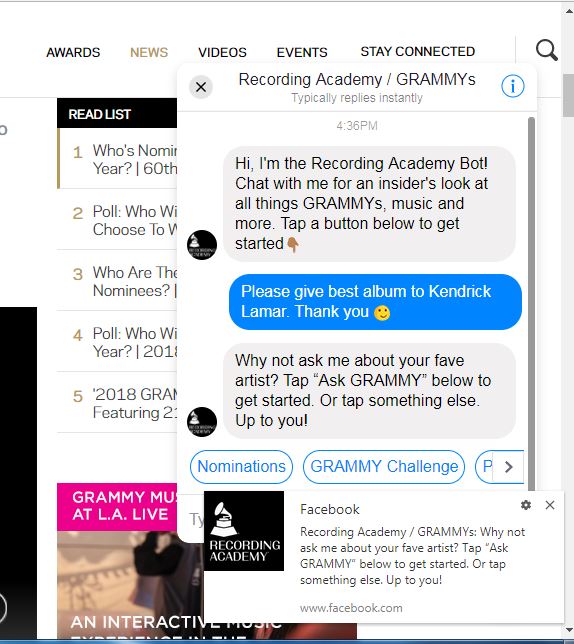 I’m not sure what sway the auto chat bot has but it was worth a try and always feels good to just get your point across, even to something that probably can’t understand you.

There are other chances for both Jay Z and Kendrick in record of the year (that rewards a song’s production – the Story of OJ and Humble respectively) and best rap album. And it would be wonderful to see No ID, who produced 4:44, get his time in the spotlight for his remarkable career behind the scenes and his deft touch producing the entirety of 4:44. What he did with those samples and the smooth ride he takes you on is a joy.

Whatever the outcome, we can be sure there’ll be ‘surprises’ and disappointments along with the well-deserved.

It’s how these are balanced (and what happens with album of the year) that will ultimately determine whether the Grammys really are learning from their past mistakes.

So, c’mon Grammys. Do this one right … please?

Gimme a piece of your mind Cancel reply

Yesterday, on my mind